Ed Keller was the first to notice the changes. He thought it was something else at the time; something that he feared more than death; a memory of his father that stalked him. 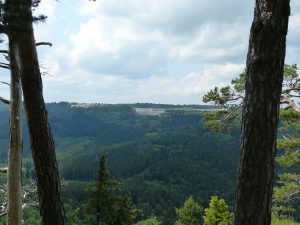 In mid-September, the nights were getting longer and the air in the Oregon mountains seemed to grow brittle. The creek beds were awash with color—alders and aspens going from green to yellow. Under the forest canopy, vine maples had gone blood-red. The wind, high in the Ponderosa and Douglas fir whispered secrets.

Ed had pulled off the main gravel and jockeyed his Forest Service pickup down a passable skid road where he could take a leak and do some paperwork—kill some time before rolling into the ranger station. The place was familiar. He stopped there often to let Sally, his butterscotch Brittany, stretch her legs awhile.

Sally knew the place, too. The skid road was cut into a steep hillside at the base of a clear-cut. On the low side the ground dropped away into the canyon with the river rushing over the rocks below. She rocketed out of the truck and scampered down the bank toward the creek. To the west, the Cascades stood against the horizon. Northward, along the crest were the peaks of the Three Sisters; due west the distinctive column of Pinnacle Butte, called “the Spire” by the locals. On a smoky summer evening the Sisters would turn pink and the Spire seemed suspended against the smoldering red sunset.

But this afternoon Ed wasn’t awed by beauty; he was anxious and fearful. He stood with his hand on the door handle of his Forest Service pickup trying to fight off a deep sense of uneasiness. It was as though he had forgotten something and couldn’t decide what it was. He didn’t like the feeling one bit. It frightened him, and fear was an emotion he’d carefully taught himself to ignore. If he ever felt it he never showed it.

Ed retraced his steps back to the stump where he had stood relieving himself a few moments before and scanned again the two ridges between him and the Spire.

The far ridge was scarred by clear-cuts, square blocks where the trees had been ripped from the mountainsides like chunks of flesh. Clear-cutting, was unpopular with environmentalists, but was still common forest management. The theory was that the harvested area would reseed from the perimeters. True, but it left a decade’s long scar on the land.

The fact was, laying out timber sales was a big part of Ed’s job. He had been finishing one today not unlike the sales on that far ridge…roughly square plots of bare land. But the closest ridge had been left unlogged, deemed too steep and too near critical watershed. At least that was what Ed remembered…or thought he remembered. But there was a thumb-shaped patch of nearly bare ground extending from the far side of the ridge and down into the center of it, a treeless island almost to the road. It was a random looking patch that Ed didn’t remember.

What he remembered was uncut timber from the ridge top, angling down the slope along a shallow drainage to the east until it met the road on the south. But there was that bare patch. A fire? No. Too even—a clean straight arc. There must have been some reason he’d authorized logging there. Insects or a diseased stand? Or maybe he wasn’t involved. Maybe somebody else on the district, but he would have at least known. Moreover, it didn’t look like a freshly cut unit with telltale gouges and slash piles. It looked to be years old, with signs of natural reseeding.

What bothered him most was that he could not remember. He looked away and then back as if his eyes might tell him something different, but each time that bare patch was still there, extending like a brown teardrop down the face of the slope.

Ed walked slowly back to the truck. He knew the source of the fear—more like panic. It was the image of his father, slack-jawed and bewildered in the final years of his life. Edward Keller Sr. had begun to falter while Ed was working in Colorado. At first it had been easy for the family to ignore his father’s confusion. On brief visits home for holidays Ed could write off the occasional social misstep or memory lapse as the usual advance of age. Thinking back on it, he realized that his father’s mind was becoming muddled even then. For years it had been unspooling like an old movie reel and they hadn’t known it. The family thought he was just getting hard of hearing.

It was a long, slow dying. What made it worse was that the senior Keller was aware of what was happening to him. As the months passed he became increasingly agitated and angry, sometimes lashing out at anyone who dared try to help. He was trying to fight the disease that stalked him. As often as not it looked like fury. Then he started to give up; long quiet spells; blank expressions; tears. That was when Ed’s mother asked Ed to take his father’s hunting rifles out of the house.

In retrospect, Ed wondered if he should have. He knew his father. He had watched him wait for the right moment to set the hook, or for a buck to come within range—the patience of a tree. It was a competition for the elder Keller. He would compete against the buck, or the trout. He challenged nature on his own terms, in his own good time. Ed imagined that his father would have wanted to fight this disease on his own terms, too. But Ed had his mother to think about.

At the end, his father had lost it all. He died of pneumonia two years later.
It was an experience that Ed tried not to think about, but the memory intruded on his mind each time he struggled with a name or forgot something. He would tell himself that everybody had moments like that. He would remind himself that Alzheimers wasn’t necessarily hereditary. The research wasn’t conclusive.

That’s what the doctor had said and Ed cursed him for it.

Ed knew every road and rut in this forest—a map with legs, his friends said. Yet, he had deliberately cut a small stand of trees in the middle of a hillside and he had no idea why. This was no misplaced tool or a forgotten name. This was different and it terrified him.

The dog came running from out of the woods, made a straight line to the truck. Just as Ed swung open the door she sprang across the last three feet landing in the passenger seat.

Ed got in, started the truck, dropped it into gear and then just sat there, foot on the brake, hands hanging loosely from the steering wheel.

Somewhere above the dashboard of the truck he saw himself as a kid—nine or ten—hunting with his father. He was lost; gotten himself turned around. He panicked and started running wildly, calling out and crying.

The truck was creeping forward. Ed slammed his foot on the brake nearly throwing Sally on the floor. Damn, what’s the matter with me?

Ed powered the pick-up onto the road and gunned it; gravel clattering against the wheel-wells as he steered down the hill through the last of the open area and into the shadows. The road snaked its way into the deepening forest, contouring down the slope of the canyon before making a hairpin turn as it bridged the creek that had, over thousands of years, carved the drainage into the mountainside. For the next few miles, until the road broke out onto the flat, Ed wrestled with his thoughts. Why did we cut that unit like that? His mind sorted through possible reasons, trying to jog his memory. Diseased trees? Endangered species? Seeding concerns? He decided that he would review the records of the sale when he got back to the station.

For some reason the decision to check the files on the sale and review the aerial photos, quieted his mind. Always make a plan, his father had taught him. Decide what you’re going to do and then do it. He decided he would review the files after Beverly left for the coast tomorrow. Friday, she was going to take the boys to Coos Bay for the weekend to visit her parents who had moved there after her dad retired. They would leave right after the boys got out of school. Ed had opted to stay home this time so he could catch up on some projects around the house. He would look into that timber sale then.  Let’s see that would have been two years, maybe three. Five?

In a reflex instant his body stiffened and his mind came to full alert. Sally lunged at the passenger side glass, snarling fiercely. The hair on her neck bristled. Her bared fangs snapped against the glass as she roared her intentions to shatter the window and get at whatever was outside.

Ed stopped the truck, temporarily throwing Sally off balance. The dog paused only for a moment before resuming her challenge.

He leaned across the seat to get a better look, struggling for a glimpse past Sally, as she continued to lunge at whatever was out there.

Author Note: I am exploring how to craft the plot. There will be several characters that move the story and some of them will interact more than others. I am toying with the idea of interweaving their stories within chapters as opposed to giving each of them their own chapter.  Just one of the things about which I will be accepting advice from you. ]